Images and Power in the Digital Age : The political role of digital visuality 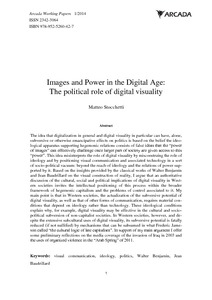 The idea that digitalization in general and digital visuality in particular can have, alone, subversive or otherwise emancipative effects on politics is based on the belief the ideo-logical apparatus supporting hegemonic relations consists of false ideas that the “power of images” can effectively challenge once larger part of society are given access to this “power”. This idea misinterprets the role of digital visuality by misconstruing the role of ideology and by positioning visual communication and associated technology in a sort of socio-political vacuum: beyond the reach of ideology and the relations of power sup-ported by it. Based on the insights provided by the classical works of Walter Benjamin and Jean Baudrillard on the visual construction of reality, I argue that an authoritative discussion of the cultural, social and political implications of digital visuality in West-ern societies invites the intellectual positioning of this process within the broader framework of hegemonic capitalism and the problems of control associated to it. My main point is that in Western societies, the actualization of the subversive potential of digital visuality, as well as that of other forms of communication, requires material con-ditions that depend on ideology rather than technology. These ideological conditions explain why, for example, digital visuality may be effective in the cultural and socio-political subversion of non-capitalist societies. In Western societies, however, and de-spite the extensive subcultural uses of digital visuality, its subversive potential is fatally reduced (if not nullified) by mechanisms that can be subsumed in what Frederic Jame-son called “the cultural logic of late capitalism”. In support of my main argument I offer some preliminary reflections on the media coverage of the invasion of Iraq in 2003 and the uses of organized violence in the “Arab Spring” of 2011.