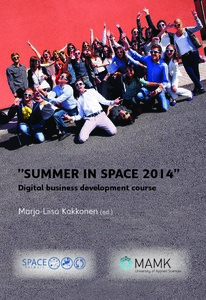 Summer in Space concept was piloted in Norway in 2013. It was a two-week intensive course in which 16 students took part from four different higher education institutions. The feedback of the students, teachers and the local company as a commissioner indicated that it was a good initiative and worth continuing in the future. Based on the development suggestions of the pilot course, Summer in Space 2 was implemented in Mikkeli in August 2014. It was a three-week course in which 31 students and eight guest lecturers representing nine different nationalities participated. Two local teachers supervised the project assignments of the students for the local company.

The learning was based on doing real cases for the local company and the project works were done in an intensive way during three weeks. The guest lecturers gave their contribution by teaching, supporting and complementing subjects and topics in the project work. The students used mainly their previous knowledge, skills and experiences in their multicultural student groups. In the end, the completed project outcomes were introduced, and the local company was pleased with the good and useful results of the student groups.

This publication includes five articles which illustrate the implementation of the Summer in Space concept. The first article describes the history and context of the concept. The context refers widely to European Network of Business and Language Studies (SPACE). The second article introduces the highlights of the Summer in Space pilot course and how it was conducted in Norway in 2013. The third article presents all the practical things related to the organisation of Summer in Space 2 in Mikkeli in 2014. The fourth article addresses the learning of students during the three-week learning process. It is based on the learning diaries of the students. Finally, the fifth article describes the implementation of the course from a perspective of a local supervising teacher. The teacher sees it from the pedagogical point of view. In addition, at the end of the publication there is a detailed programme of Summer in Space 2 as an appendix which can be used as a guideline for the implementation in the future.

The objective of this publication is to document and share knowledge and experiences related to the Summer in Space concept and its current implementation. The Summer in Space concept seems to be a good practice which can be implemented as such or developed further for the purposes of a higher education institution. Although it is challenging and quite expensive to arrange the event for an international group of over 30 students, yet the benefits are obvious to the students, teachers, local companies, and the higher education institutions involved.