Exploring the Current and Future Role of Tech-nology in the Socialisation, Wellbeing and Inclu-sion of Elderly Immigrants in Finland 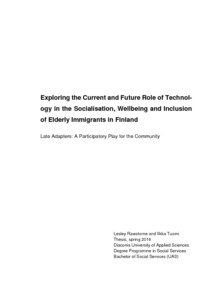 ABSTRACT
Lesley Rawstorne and Ilkka Tuomi. Exploring the Current and Future Role of Technology in the Socialisation, Wellbeing and Inclusion of Elderly Immigrants in Finland: A Participatory Play for the Community. Helsinki, 2016. 56 pgs.
The aim of this thesis is to explore and raise awareness of the current and future challenges of the elderly in the digital age, by producing a community play that could be used on a participatory level to raise awareness of the issue of social connectedness and the impact of technology on human relationships.
The play will be performed as part of a community festival called Kallio Kukkii, and will take place on the premises of an elderly centre. The performances will be for both the elderly residents of the centre as well as the wider community. The script of the play will then be made available on the internet so that it can be freely used by other community groups interested in staging a performance. The play deals with the specific problems of ageing immigrants in Finland but the general themes of the play, such as the ethical dilemmas surrounding gerontechnology and social connectedness, are universal.
The thesis product is based on an adapted literature review as well as the findings of studies on the current challenges of ageing and socialisation as well as future scenarios. The play is used as platform for dialogue and efficacy concerning elderly rights and explores the impact of technology on inclusion of the elderly in the digital age. Key words: Dramaturgy, efficacy, elderly, immigrants, Finland, Alzheimer, dignity, transnationalism, technology, cultural competency, isolation, inclusion, dementia, participatory drama, gerontology, Ehealth, telecare, telemonit oring, telehealth, gerontechnology, adaptive technology, ambient assisted living, robotic nurse, social media, user perspective, Japan, demographics, camaraderie, ageing demographic, social media, future/scenario workshops, robo ethics, loneliness, digital inclusion, play.