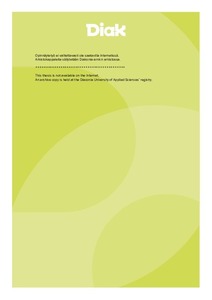 
Quantum physics revolutionized our understanding of reality approximately a hundred years ago. The Newtonian classical, mechanistical paradigm was challenged by the quantum theory. The development in physics has often been unnoticed in the other sciences. It has been said that the mechanistical paradigm cannot solve the problems that humanity is facing. It has even been said that many of today’s problems are caused by the dualistic understanding of the human, society and reality.

The aim of this research is to find out in which ways the paradigm shift in quantum physics has inspired the development of new ideas in social sciences and healthcare and in which ways these ideas could be used to shape the future. The goal of this thesis is to produce a concise, easily accessible, general view for the reader to gain an understanding of the “quantum” phenomena. If one so chooses, this could also provide tools for reflecting on one’s own worldview, the general western worldview, identity, work and organizations from this perspective. It could even provide inspiration to start working as a transformation agent in one’s own environment, in order to question the existing structures.

The research was carried out using the descriptive literature review method. Research material was gathered from the several databases, and manual searches were also performed. The research material consists of one book, one book chapter a, doctoral dissertation and four articles. The material was analyzed using content-based content analysis.

The results were separated to different categories: Quantum in social science, quantum in healthcare, quantum leadership, quantum theory in psychotherapy, quantum theory and human rights and the new holistic paradigm. Finally, a model of society, based on the unity, was created. The “quantum” has inspired researching new perspectives on almost everything in social sciences and nursing science. It could provide a new philosophical foundation, based on the unity of all. It personally challenges everybody to reflect on one’s own worldview, which builds a foundation in developing our society and institutions, which are basically created by human intentions. Consciousness is in a central role. When change is understood to be the nature of life, the perspective needs to change from processes to relationships. Leadership principles need to change accordingly, as leaders have a central role in the changemaking process. The concept of nature also gets a central role, as human beings are now a part of a system, instead of being the ruler of all.