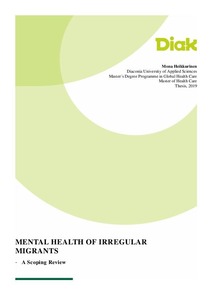 This research is a scoping literature review study consisting 12 articles dated between 2005 and 2016, and they were analyzed with inductive content analysis method. The analysis resulted three main themes: “Disorders of the mind”, “Continuous inner terror and despondence” and “Segregation, lack of basic security and depletion of living re-sources in individual´s life”.

The main findings were, that the most common mental health problems of irregular migrants were anxiety, depression, sleeping disorders and stress, followed by psychoses and PTSD. Also the constant fear, feelings of anxiousness and depression simultaneously, expressing mental imbalance through physical symptoms, and isolation, suggested that irregular migrants may have atypical depression symptoms compared to others and they express their poor mental health more often through bodily pain.

It was also discovered, that the undocumented status itself, being illegal and not having any kind of position inside society, has the greatest single effect on their mental health. Irregular migrants had also many obstacles when trying to seek help for mental health problems and the most barriers were related with cultural issues. These barriers were worsening their mental health, causing possibly the migrationrelated grief. It was also found, that irregular migrants own personal resources are extremely limited leaving them entirely dependent on outside help. Irregular migrant´s ignorance about their own rights, distrust, doctors’ indifference, and problematic interaction leave them easily outside information and healthcare.