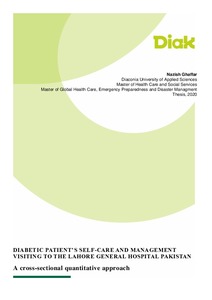 Ghaffar, Nazish
All rights reserved. This publication is copyrighted. You may download, display and print it for Your own personal use. Commercial use is prohibited.
Näytä kaikki kuvailutiedot
Julkaisun pysyvä osoite on
http://urn.fi/URN:NBN:fi:amk-202002182575

Nazish Ghaffar
Diabetic Patient’s self-care and management visiting to the Lahore General Hospital Pakistan
43 and 2 appendices
Spring 2020
Diaconia University of Applied Sciences
Arcada University of Applied Sciences
University of East Africa, Baraton Kenya
Master’s Degree in Health Care and Social Services
Master of Global Health Care,
Emergency preparedness and disaster management.
Diabetes Mellitus appears to be a global epidemic and increasingly major non-communicable disease threatening in both affluent and non-affluent society. At present, Pakistan ranks 6th among the countries with the highest burden of diabetes mellitus Pakistan with a population of 200 million has more than 10% of its adult population as diabetics (Shaikh, 2009). A decision of this research was made to study about the management and the self-care of the patients visiting to the Lahore General Hospital.
Aim of this research is to study about the patient’s self-care and management visiting to the Lahore General Hospital and the research question is that, How the patients are taking care of themselves and How much patients have the knowledge about the diabetes and the possibilities of the complications of untreated disease? Purpose was to find out the possible gaps in the knowledge and management of diabetes mellitus.
A descriptive cross-sectional study has been carried out on 120 patients visiting the medicine department OPD Lahore General Hospital, Lahore. Data has been collected over the period of 3 months during the March, April and May 2019 by the non – probability convenience sampling method for both genders. Prior permission has been taken from the ethical review committee and by signing the consent forms before collecting the data.

The results show that the overall level of awareness in both male and female diabetics has been found low; and comparatively the occurrence of diabetes has been found high in females as males.

It has been observed from the results that, the patients are lacking the awareness of the possibilities of the complications of untreated disease. The highest response was 78.3 percent who responded to the correct answer. The lowest percentage of correct answers was 39.2%. It was asked from the participants if they know what does hypoglycaemia means and what are its symptoms. The results are very surprising that more than half of the participants are not having awareness about the management and the self-care plans of the disease. Rest of the percentages of correct answers falls between 39.2% - 78.3%.

The overall level of awareness in both male and female diabetics was low; and. In diabetics, patients are expected to follow a complex set of self-care and management for their diabetes on daily basis and it have a dramatic impact on the progression and development of their disease by participating in their own care. Major gaps have been found on which diabetic patients have to work on. In diabetics, patients are expected to follow the special guidelines of self-care and management on daily basis.