FORCED LABOUR THROUGH HUMAN TRAFFICKING AMONG UGANDANS IN THE MIDDLE EAST 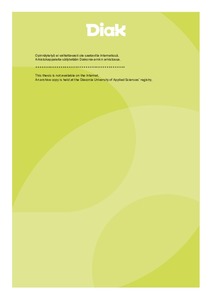 Kaye, Muwada
All rights reserved. This publication is copyrighted. You may download, display and print it for Your own personal use. Commercial use is prohibited.
Näytä kaikki kuvailutiedot
Julkaisun pysyvä osoite on
http://urn.fi/URN:NBN:fi:amk-202002031952

The study aims at analyzing the phenomena of forced labor and human trafficking among Ugandans ending up in Middle East. It also investigates the leading factors to the continued prevalence of the hitherto mentioned social problems. This study uses previous literature on forced labor and human trafficking to form a theoretical framework to assess the role played by the government of Uganda in addressing the social evils of forced labor and human trafficking. The thesis was accomplished following integrative literature review to extract the data for the study. The relevant data used in the study was analysed using content analysis technique to describe how the major results of the thesis can be applied in social work hence forth leading to reduction of vulnerability among Ugandans. The thesis analyses how full observance of human rights, transformation of the education system in Uganda and provision of independence to the law enforcing agencies can influence community development. This is through harmonized environment and improved service delivery towards combating human trafficking and forced labor in Uganda. Thus, applying community-based approaches to tackle the phenomena also includes citizen participation which ensures equality for all and solidarity in community.
The thesis results indicate a joint effort to combat human trafficking between individuals and authorities to identify and help victims of human trafficking. However, Uganda as a country has not done enough to curb human trafficking as there are many new cases of victims being reported on a daily basis connected to human trafficking. This is majorly attributed to less attention by the government to implement in measures to prevent, protect and punish the trafficking in human.