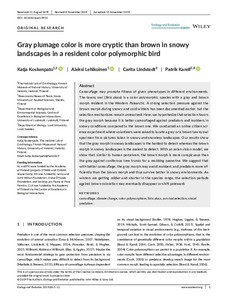 Camouflage may promote fitness of given phenotypes in different environments.
The tawny owl (Strix aluco) is a color polymorphic species with a gray and brown
morph resident in the Western Palearctic. A strong selection pressure against the
brown morph during snowy and cold winters has been documented earlier, but the
selection mechanisms remain unresolved. Here, we hypothesize that selection favors
the gray morph because it is better camouflaged against predators and mobbers in
snowy conditions compared to the brown one. We conducted an online citizen science experiment where volunteers were asked to locate a gray or a brown tawny owl
specimen from pictures taken in snowy and snowless landscapes. Our results show
that the gray morph in snowy landscapes is the hardest to detect whereas the brown
morph in snowy landscapes is the easiest to detect. With an avian vision model, we
show that, similar to human perceivers, the brown morph is more conspicuous than
the gray against coniferous tree trunks for a mobbing passerine. We suggest that
with better camouflage, the gray morph may avoid mobbers and predators more efficiently than the brown morph and thus survive better in snowy environments. As
winters are getting milder and shorter in the species range, the selection periods
against brown coloration may eventually disappear or shift poleward.