Functional shifts in estuarine zooplankton in response to climate variability 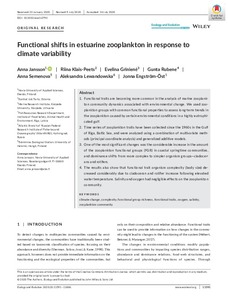 1. Functional traits are becoming more common in the analysis of marine zooplankton
community dynamics associated with environmental change. We used zooplankton
groups with common functional properties to assess long-term trends in
the zooplankton caused by certain environmental conditions in a highly eutrophicated
gulf.
2. Time series of zooplankton traits have been collected since the 1960s in the Gulf
of Riga, Baltic Sea, and were analyzed using a combination of multivariate methods
(principal coordinate analysis) and generalized additive models.
3. One of the most significant changes was the considerable increase in the amount
of the zooplankton functional groups (FGR) in coastal springtime communities,
and dominance shifts from more complex to simpler organism groups—cladocerans
and rotifers.
4. The results also show that functional trait organism complexity (body size) decreased
considerably due to cladoceran and rotifer increase following elevated
water temperature. Salinity and oxygen had negligible effects on the zooplankton
community.