INTEGRATION OF IMMIGRANTS IN FINLAND : THE ROLE OF HAKUNILAN INTERNATIONAL ORGANIZATION 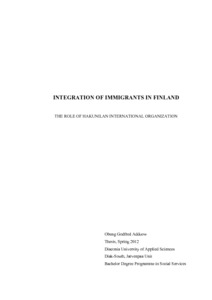 This study is to find out the how the social aspect of integration of immigrants is being
carried out to build a strong peaceful and intensive interaction between foreigners and
the locals in the Hakunila district. It also looks at the role of nongovernmental
organizations (Hakunilan International Organization) in the integration process of
immigrants.
Interviews and observation were the methodological tools used in this qualitative study.
In all, fourteen (14) people from who are members of the organization were
interviewed. Those interviewed were from different cultural background.
The study also observed through active participation of activities organized by the
organization throughout the studies. Through observation, the study was able to build an
in-depth understanding of how those being studied see and experience about their
surrounding and interpret as such.
The findings of the study show a very positive impact of the organization in integrating
immigrants into the Finnish mainstream society. This is because, their activities reflects
the wishes and aspirations of the immigrants and the host community.
The findings also revealed that, the organization is plagued with inadequate resources.
The findings of the study further revealed that, Finnish government policy of integration
is geared towards helping immigrants getting requisite knowledge about employment and working life.