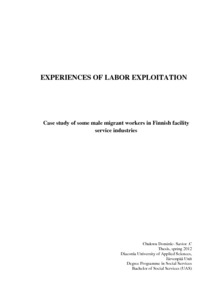 Qualitative method of research was used in data collection and it was done through structured and unstructured personal interviews. A total of eight migrant workers who are currently working in the cleaning companies and who equally reside in cities of Helsinki, Vantaa and Järvenpää were interviewed.

The findings were divided into three parts. The first part of the finding uncovered the various kinds of exploitative practices the migrant face in their workplaces such as denial of various labor rights. The second part showed the personal feelings of the exploited persons in response to their experiences. And the third part of the finding showed the various negative effects that labor exploitation produces on the life of the exploited persons such as psychological, physiological, and emotional as well as health effects. The study was able to discover the reasons for migrant workers’ vulnerability to labor exploitation and the actions that could be taken to reduce the vulnerability of migrant workers in their workplaces.