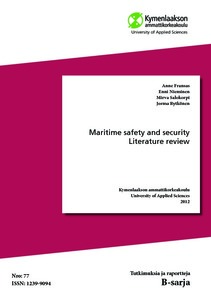 The increased numbers of maritime security problems during the last decades have forced international societies to organize closer co-operation and create better plans to response to the problem. Security Research and Innovation Forum, ESRIF has assessed scenarios in the future, in 2030. These scenarios embraced a range of risks, from natural to man-made incidents. ESRIF has stated that capabilities and capacities have to be mobilized to deliver equipment and services to deal with these risks. (ESRIF, 2009.) Finnish security committee has highlighted the need to shift the focus of preparedness proactively to active participation and the identification of threats and disorders as early as possible and to convey the situational picture quickly.

Maritime safety is widely studied and for example maritime safety risks are rather well known and analyzed. In contrast, maritime security issues are not studied as much, and security threats in the maritime industry are not defined and analyzed systematically, with the exception of threats caused by terrorists and piracy.