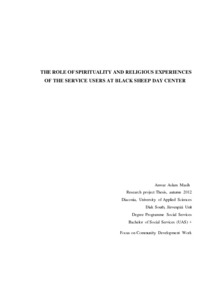 Masih, Anwar Aslam. “The role of spirituality and religious experiences of service users” at Black Sheep Day Center Tampere.
64 p; 2 appendices. Language: English, Järvenpää.Autumn 2012.
Diaconia University of Applied Sciences, Degree programme in Social services. Degree: Bachelor of Social services.
This thesis is an action oriented project. It includes a written report on the process and results of the explanatory thesis.The aim of the study were to produce informative material for preventive services and Black Sheep Day Center in Tampere. It also emphasized the importance of spiritual elements in BSDC environment context. The aim was to make the workers aware of group and case work methods. The idea was to broaden their skills in preventing substance abuse. Three people were interviewed and 34 questionnaires were returned.
Qualitative and quantitative data such as three interviews, observations, discussions and statistics were collected over the period of six weeks of participation in BSDC. The conducted interviews recorded and questionnaires collected were the primary data. Field diary was another source of data which has been mentioned in the report of exploratory thesis.
The product of the thesis is a written report. Participation in religious activities such as praying and singing were associated with lower odds of alcohol use among service uses. BSDC environment has become substitute of family to certain service users and low level of education has contributed into the marginalization of service users at BSDC were considered as thesis findings.
The results show that spirituality can play an important role in service users lives and may serve as a protective factor against substance use and miss use.
Key words: Black Sheep Day Center, Spirituality, service users, case study, environment, primary data.