THE BULGARIAN ROMA IN HELSINKI : the diverse sub-groups amongst Bulgarian Roma and their reasons for being in Helsinki : a documentary film 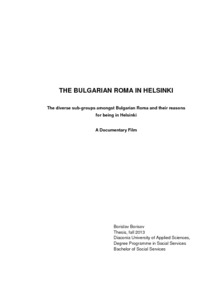 The purpose of this report is to provide an accurate picture or describe the idea, the process and the outcome of a documentary project titled “The Bulgarian Roma in Helsinki”. The idea behind it is to create awareness about the Roma minority groups of Bulgarian origin in Helsinki and the unique process that was involved in creating a zero-budget documentary.
The documentary, which has influenced its creator a great deal in his perception of Roma, and its outcome described in this report, is visible and positive. Major political and social organizations identify with the idea and have expressed support and willingness to promote and present this film for the benefit of people and organizations.
The process, long but productive, was educational in a multitude of ways to its creator and all the ones involved from start to finish including the participants in the film itself.