Notes & Tones on Aspects of Aesthetics in Studying Harmony and Disharmony : A Dialectical Examination 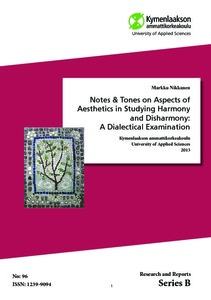 The Uffizi Gallery, located in Florence, is undoubtedly one of the most important museums in the world. Hence, it is truly a place for aesthetic experiences. Historically, Florence was once at the core of a nexus - of international network with diverse actors and their divergent intentions and interests. This led to fruitful exchange with artistic influences. Arguably, the collection of the Renaissance painters is one of the most significant on world scale.

One of the painters in the collection, Giovanni Bellini, painted a piece of art with a name Sacred Allegory. According to Official Guide of the Museum:

many different theories have been advanced concerning the symbolic meaning of this enigmatic Allegory….. The painting is full of saints and animals including a centaur, set in a peaceful, aquatic landscape, rich in interesting detail to be noted
and explored

This study embraces also different theories in order to the approach aesthetics, which is often, at least scientifically, full with diverse symbols, representations, and their explanations. In earlier studies related to the topic of this essay, the peaceful elements of aesthetics, particularly harmony and symmetry, have been under consideration. But not just harmony, also disharmony is connected with aesthetic theories and needs articulation. This state of the Things requires some sophisticated methods to be used and explored. In this essay, the dialectical examination provides a basis for the subsequent argumentation.

In order to intensify the artistic expression, Bellini used opposites in his painting. Most of them can be regarded as beautiful, but not all. The contrast wake interest and delight in the eye of an observer. Also, in this article, the opposites provide some new mindsets for in-depth analysis. The contrasts are not neglected but rather exposed. The notion of dualism is a major carrier of analytical ideas and concepts.

In the work by Bellini, a hortus conclusus is depicted as an emblematic attribute. Despite of its mostly theological message in the masterpiece, this detail can also be understood by using more profane expressions. By definition, the originally Latin term can refer also to a garden as a bounded space. Aesthetic experiences always take place in some context. It can be an exhibition, like the one in Uffizi Gallery, but also more prosaic. Arguably, space indicating place or distance, is worth analyzed and explicated.

At the beginning of this study, there was a One. Then the One was divided into Two. In the end, as we’ll see, the twoness is reunited. And then there is just the One.