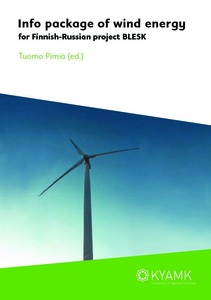 The utilization of wind energy has been tempting for centuries. Wind energy is most often and in most locations available and is renewable. The windmills of old times have been widely used in local energy production for grinding corn and pumping water to storage tanks in distant locations, in an isolated operation (islanding).

A big boom in wind energy utilization started in the 1990s when increasing energy prices, air pollution and people’s awareness of limited fossil energy sources made people think of renewable and sustainable energy resources. Many countries started to support the development of wind energy utilization. For example, Denmark, Germany and the USA subsidized significant research and development projects, and a lot of wind power was installed in these countries during the first decade of this millennium. In recent times, contradictions have arisen due to the shut-down of nuclear power plants and the inexpensive prices of natural gas, oil and shale oil. In the wellknown German “Energiewende”, conventional coal-based power plants have started up, while North-German electricity transmission lines for the further harnessing of wind energy should be improved. The Scandinavian electricity market is gradually converting to a European electricity market.

Modern onshore and offshore wind turbines of wind farms convert the kinetic energy of wind to electricity using high-class technology with remote monitoring and operation. These turbines are able to produce energy with wind speeds from approximately 3 m/s up to 25 m/s, with a power up to 8 MW in a grid operation. However, there are many different kinds of challenges in implementing wind turbines for electricity production. In our society, uninterrupted electricity supply is expected at all times. When there is no wind at all or a stormy weather, the production of electricity must be ensured by some other means.

In the longer term, most expect that electricity prices will not fall. Most probably, future electricity should be produced using different sources, and in many ways. This review package provides readers with basic information on the utilization of wind energy.