GENDER EQUALITY IN POLITICS IN NEPAL : the Role of Demo Finland to Promote Gender Equality in Nepalese Politics 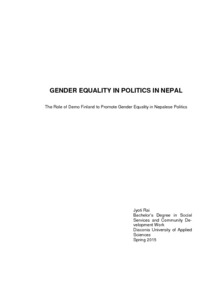 The research aims to focus on unequal gender power relation and women’s role in decision-making process in the politics in Nepal. This study also evaluates the role of Demo Finland, a Non-Governmental Organization to politically empower women through its project called Mobilizing Youth for Gender Equality in Politics.

The study is based on the qualitative research method. A thematic data analysis is used to analyze the data collected from field. The unstructured interview was conducted with two political youth and student organization members to discuss the provision of 33 % women participation in Constituent Assembly ensures the ability to access the political power in all levels. The socio-cultural and economic status of women in grass-root level is studied to relate the factors that hinder women to voice their opinions, raise questions on their leadership skills, and how these women exemplify a majority of women in Nepal.

The research is not influenced by negative gender-based assumptions; the conclusion is made on the basis of collected data analyzing different relevant materials supporting the research topic. Importantly, women’s participation in poli-tics and legislative structures are emphasized more in the entire content as the statistical data studied shows their participation in decision-making level is rel-atively lower than men.