Deeper Than The CUT : FGM/C After Decades of Advocacy in The Gambia 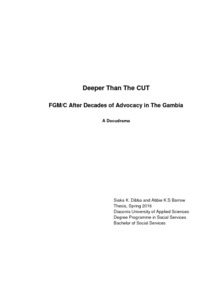 Deeper Than The Cut - Triller.mp4

The goal of this project is to find out and document why Female Genital Mutilation/Cutting (FGM/C) continue to exist in The Gambia, despite decades of continuous advocacy for its eradication. We are aiming that this video will be used as an advocacy tool by organizations and individuals working on the elimination of the practice of FGM/C both in The Gambia and beyond. Also, this video will not only to raise awareness about the practice and to know the reason for its existence, but it is hoped that it will improve on the general approach and partnership in achieving an ultimate success in ending FGM/C.

The development of the project began in September 2014 and ended in September 2015. The 15minutes docudrama was produced after Seven (7) days of filming in The Gambia, reviewing of other documentaries and reading literatures. Editing took about four (4) months and the first draft was presented to students and thesis supervisors in order to get feedback. Making the docudrama was a learning experience as it exposed us to different issues and better understanding of the subject of FGM/C.

The result of the interviews revealed that there are several reasons why FGM/C practice still exists in The Gambia. Some of the reasons that stand-out include religious belief, initial approach of campaigners towards ending the practice, cultural beliefs that see the FGM/C as a rite of passage and the lack of legislation prohibiting the practice.

FGM/C is a cultural practice which still exists in The Gambia with marginal decrease in the practice. In 2005/2006, the national prevalence had been 78.3% and in 2010 76.3%, indicating that there has been a two percentage point fall in FGM prevalence over a period of five years (MICS, 2010). It has also been reported that the DHS 2013 full survey shows a reduction in FGM prevalence from 78% to 74.9% (28toomany, 2015). The trend is likely to continue if new strategies are not initiated as mentioned by the interviewees in the docudrama.

It was mentioned by most interviewees that for the practice to end in a generation, the involvement of young people cannot be ruled out. In addition, many agreed that FGM/C is unhealthy and a gross violation of the fundamental human rights of women and girls. Therefore, the practice of FGM should end with or without a national legislation that prohibits the practice in The Gambia.