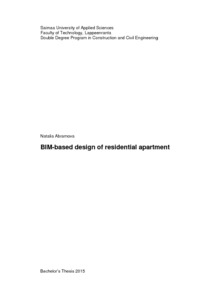 The purpose of this thesis was to create a model of the two-level apartment with program Revit Autodesk for company NCC. The apartment is situated in the housing complex Skandi Klubb, which is being built in Saint-Petersburg.
The model was made for commercial purposes, in order to speed up the selling process of this apartment, as the most expensive one.
The second purpose was to describe basics of BIM and Revit program.
The thesis is divided into two main parts: theoretical and practical. In the theoretical part the characteristics and main functions of Revit were considered. Also this part explains the concept of BIM. For writing these parts the books as well as internet resources were analyzed.
In the practical part the main steps of creating the model were described. Also the opinion of people about this model was considered.
As the result, the main characteristics of Revit program and BIM were discovered. The model of apartment was shown to the possible customers and get good reviews.