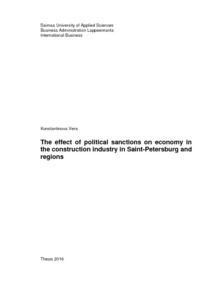 The purpose of the thesis was to find out the effect of political sanctions on a small construction business. Additionally, the history of emersion of the sanctions, their introduction in the year 2015 and their overall effect on the economy worldwide were studied. The work was commissioned by a small country-owned business AVK operating within Saint-Petersburg and its regions.
To accomplish the study the financial performance of the company was studied. This data has helped to understand the effect of the sanctions of the year 2015 on the business. What is more, the balance sheets and the overall goods flow and sales were analyzed. The interview with the owner of the company was obtained, including the overview on the effects and outcomes on the business and current situation of the company in the market.
The result of the study has shown the overall effect of sanctions on the economy in Russia in general and on the AVK company in particular. The results of the study could be applied on the ways of eliminating the losses and preventing the future risks for the AVK company