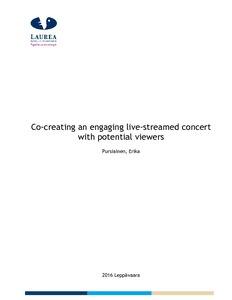 This master’s thesis is an academic development project. Through service design and co-creation, the project takes a practical and human-centered approach to defining what aspects engage viewers with a live-streamed concert. Taking an interactive approach to viewer engagement, the project also seeks to identify the co-creational aspects of an engaging live-streamed concert. By doing this, the thesis builds on existing knowledge, both academic and professional, on concert live streaming, value co-creation and viewer engagement.

The need for this thesis arises from a gap in related academic research, documented professional knowledge on concert live streaming and data on aspects, which engage viewers with live-streamed concerts. To deliver relevant findings, the thesis was produced in cooperation with a partner company, a live streaming startup, and a case concert, a weekly singer-songwriters’ night, both of which are based in Nashville Tennessee, the United States.

The project takes a multi-method approach to data sourcing by combining primary and secondary research tools. Contextual information on concert live streaming was sought through a combination of ethnographic methods and desk research. The main method for the thesis was a co-creation session, which was held in Nashville in spring 2015. The session gathered together 15 fans of the case concert to co-create an engaging live-streamed version of the concert. Silent storytelling, brainstorming, role play, and prototyping were used to gain valuable insights into the participants’ experiences.

Based on the co-creation session, the thesis brings forward two concepts, one for a memorable live music experience and another for an engaging live-streamed concert. In the form of the concepts, it suggests a number of different aspects to create engaging live music experiences with the viewers. Reflecting this information, the thesis proposes a model for co-creational aspects of an engaging live-streamed concert and suggests ways to harness interaction and participation in viewer engagement.

According to the findings, viewers engage with a live-streamed concert on two levels: in a two-way, interactive relationship with both other people involved in the concert (online viewers, venue audience, artists, host, etc.) and the technological solutions used in the production. Getting the best results out of these interactive relationships that hold promise to engage the viewer requires harnessing new ways of co-creation and innovative tools such as virtual reality.