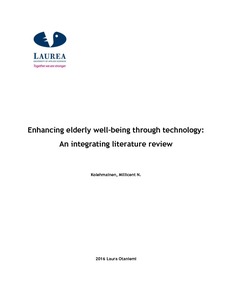 According to World health organization (WHO) older people have been defined as a chronological age of 65 years, although this may differ in different societies. Generally, it refers to the age where an individual begins to receive pension (WHO 2014). Similarly, the Center for Disease Control (CDC) 2007, defines elderly as greater than 65 years of age. Demographically, several categories ranging from young old, oldest old to frail elderly defines how the elderly´s cognitive and physical changes deteriorate as they grow older. It is therefore imperative to offer them support either from their families, agencies or health institutions
The purpose of this thesis was to investigate different technologies that enhance elderly well-being in order to make a conclusion for good care practice.
The aims of the study were; a) to explore the technologies that exist, b) to describe how these technologies are incorporated into elderly care, and c) to evaluate their importance in promoting communication and emotional support to the elderly. An integrating method of literature review was applied focusing on the use of technology in European, American, Asian and African societies that promote health among the elderly at home in their own settings or to designated health institutions. The literature and empirical evidence gathered demonstrate that technology can contribute heavily to the elderly well-being so long as the applications are geared towards independent living (Griffith 2013).