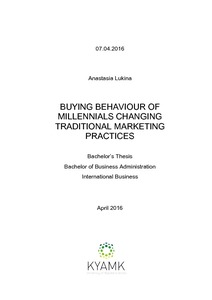 People born roughly between 1980 and 2000 are commonly known as Millennial generation or Generation Y, who in the modern day they are entering adulthood. Millennial young adults are becoming of sharper social, academic and marketing focus due to the vastness of the generation, its growing impact on the society and increasing buying power. Identifying general definitive features of the chosen generation was made one of the thesis objectives.

As a main objective of the study, the thesis sought to reveal the necessity and subsequently the nature of the marketing approach change in response to the chosen demographic phenomena in Western countries. Semi-structured in-depth interview was chosen as a data acquisition method. Interviews were conducted with 6 Millennial representatives from both entrepreneur and consumer side of marketing communication; all the interviews were conducted in spring 2016 in Helsinki Finland. Respondents from different countries residing in Helsinki had been chosen.

Through collaboration of literature review and empirical study results generalised portraiture of Generation Y was developed and the importance of the Millennial customer was successfully revealed. Marketing communication adjustments through alternative to traditional channels use and tools application as well as the nature of the marketing message revision in order to establish quality relationship with the chosen demographics were discovered. Not to name one, the extensive list of suggested approach transformations were proposed by listing in the conclusion chapter of the thesis.