Impacts of an Earthquake in Tourism in Kathmandu, Nepal 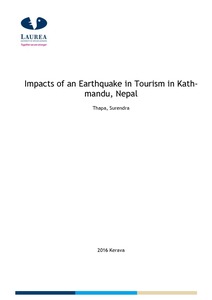 The main aim of this Bachelor’s thesis is to provide the idea or information about the after effects of the recent earthquake that has occurred on 25th of April, 2015. Since the devastating earthquake, the tourism industry of the country has fallen down.

Kathmandu is currently in a big crisis due to the recent earthquake. The earthquake was of 7.8 Richter scale and has killed thousands of people and injured many thousands of people making them homeless. It has made the situation of the country to be in a terrible state. All the business including industry and markets has fallen down and the people are in misery. Since the earthquake, the tourism industry has also fallen down very low due to the damage in famous tourist sites and the decreasing number of tourists day by day.

This thesis has attempted to describe the history of an earthquake and its continuous effects on the cultural and historical sites of Nepal and how it has influenced the arrivals of the tourist number and its impacts in the economics of the country and the tourism industry.