CONCEPT OF A SUSTAINABLE FOOD-GROWING UNIT ON MARS 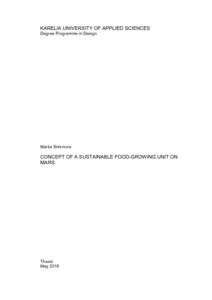 Present thesis relies on sustainable approach and the Innovative Conceptual Engineering Design. Concept development of a food-growing unit on Mars is a part of a challenge named “Sustainable Human Habitation of Mars” stated by NASA’s Epic Challenge Joensuu educational program. The thesis is a result of my collaboration with BioMars team that represents our vision on a food-growing system, which should be able to function independently beyond the Earth.

The project at hand was carried out according to the ICED methodology, which should require not only teamwork but also individual brainstorming and personal responsibilities. Thus, the current thesis should be considered as an outcome of activity within a field of design sustained by teamwork in terms of knowledge in engineering.

A concept idea of a food-growing unit was designed based on an implementation of algae and insect breeding as well as aeroponics as the main system for plant cultivation. The food-growing system was developed while taking into account Mars’ environment as well as In Situ Resource Utilization (ISRU) to sustain humans on the Red Planet.