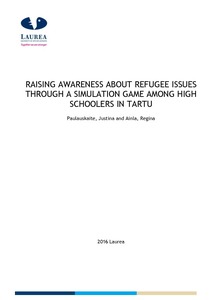 The purpose of this qualitative study was to find out, how can the game ‘Passages: An Awareness Game Confronting the Plight of Refugees’ (‘Passages’) help raise awareness among youth. Its effectiveness, as an awareness raising method, was tested with the high schoolers of Hugo Treffner Gymnasium in Tartu. This study was planned and implemented in collaboration with Kalliolan Nuoret ry organisation.

The simulation game ‘Passages’ is an educational method developed by the United Nations High Commissioner for Refugees (UNHCR, 2010). The method is designed in order to share awareness about refugees. It aims to challenge the mindsets of youngsters, in order to broaden their understanding. The particular simulation game ‘Passages’ was modified according to the theories we used, our needs and timetable. The thesis was informed by game theory, the experiential learning theory, the anti-oppressive practice theory, the empowerment theory, the values education and the theory of action. All of the theories greatly informed the planning, implementation and evaluation process of this thesis project. Naturally, all of it was based on youth work, considering that our target group was high school students. The empowerment evaluation was used to evaluate the overall thesis process.

Since it was a qualitative study, discussion and open-ended questions in the form of a questionnaire were used to gather data. Inductive content analysis method was applied to gather findings of the study. The findings from the study showed that the simulation game ‘Passages’ evoked many emotions and thoughts on different elaborate topics. The latter occurred as the participants assumed the role of refugees themselves, which allowed them to see the environment and journey of a refugee from a personal perspective. To add, the simulation game not only aroused many questions, but also ideas on how to share awareness and help maintain and support common values.

The simulation game ‘Passages’, that was conducted in Hugo Treffner Gymnasium, proved to be an effective educational tool to share awareness, whilst providing youngsters with a safe place to explore and be challenged. Lastly, after the evaluation and final findings of the study it is clear that the thesis was a successfully planned and implemented project. Such non-formal educational methods as a simulation game are increasing in popularity within the academia, as it greatly supports youngsters’ development. This implemented project could be expanded upon and developed more, in order to render even deeper effects on a larger scale.