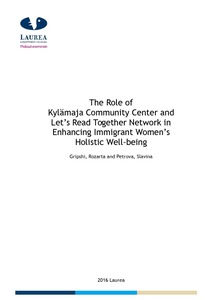 This research study was implemented during March 2016 in Kylämaja Community Center, a low-threshold meeting place for the residents of Matinkylä and Olari neighborhoods of Espoo. It was performed in cooperation with Let’s Read Together Network, which supports immigrant women in integrating into Finnish society. The study was about the holistic well-being of the adult immigrant women, who were Kylämaja Community Center’s clients and students in Let’s Read Together class. There were five informants participating in three interviewing sessions conducted in Finnish and English language. As it was agreed with the working life partners, the interviews took place on Tuesdays during the second part of Let’s Read Together class.

The purpose of the study was to acknowledge the role of the working life partners in enhancing immigrant women’s holistic well-being. The focus was put on the personal experiences of this target group and the distinct phases the women were going through their lives in Finland. The objectives were reached through semi-structured interviews.

The research study was based on community work, immigration, holistic well-being and language and culture theories. Qualitative research methods were applied and the data was examined by using thematic analysis throughout the study. The informants recognized the supportive role of the working life partners in serving their holistic well-being. Apart from immigrant women’s current necessity to learn Finnish, be part of a socially interactive environment and adapt better to the broader community, the professionally qualified women had different visions over their future in Finland. Some of the respondents were conscious about the need to search for additional associates in order to enhance their further holistic well-being in the new homeland.