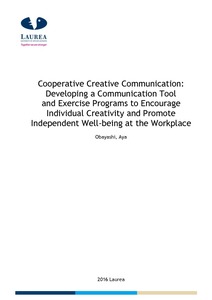 The purpose of this thesis is to report on the author’s personal project, Project Cx3, aimed at promoting the well-being of workers through the development of a communication tool and related programs, which began in January 2013 and is still ongoing as of May 2016. This thesis consists of the project background, a theoretical framework, a section on design and development, a section on implementation, and a section on evaluation. The implementation of the project was supported by five working life partners who agreed to run trial workshops and examinations, namely Keio University, M-Bridge, Harmony, Fuji-Xerox, and 204 Project.

The deterioration of mental health at the workplace is a serious issue that creates huge financial damage to society through reduced productivity, sick-leave absences and medical costs. However, in the case of Japan, mental-health campaigns run by authorities tend to focus on the symptoms and causes from a purely medical perspective, ignoring individual definitions of well-being and happiness of workers. For sustainable health development at the workplace, a worker-centred approach to well-being promotion should be considered. In order to assist employees to promote their own well-being, thereby improving the overall output of the organisation, the author created supportive tools named Cx3BOOSTER® and Cx3mini focusing on the key words of communication, creativity and well-being.

For developing the tool, the main methods taken were solution-focused approaches, creative approaches and group dynamics. Solution-focused methods aimed to assist co-workers in rec-ognizing each other’s unique qualities, and also to allow each employee to express his/her own personality and feelings. Creative approaches and team-building methods could help workers appreciate the diversity of their group and to gain a solution-oriented mind set to empower themselves. Hypotheses were combined with existing theories and methods in to the tool design and program development.

During 2015-2016, over 300 people participated in 17 workshops in Japan, of which 5 are covered in this thesis. In summer 2015, 2 workshops were held to examine whether there was any room for further development and whether modifications of the tools were necessary for the their use by Japanese clients. The official model was published in October 2015, after which several additional workshops were organized in February 2016, and 3 of them are reported in this thesis.

A good deal of positive feedback has been collected from workshops in February 2016, and currently many participants are utilizing the tool to further employee well-being. Needless to say, continuous development will be necessary to further enhance the quality of the tool and programs, but in overview of the past 3.4 years, it appears safe to say that this project has been successful.