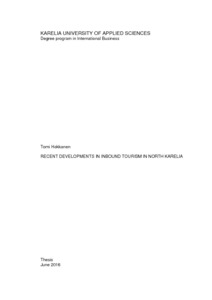 This research focuses on the situation of inbound tourism in North Karelia as well as derives suggestions from the made analysis. The research was conducted according to the commissioner’s guidelines.

The paper utilizes secondary data in the form of statistics and primary data as interviews that were conducted during the research process. The report consists of separate written parts regarding adjustment to changes, recent development, interviews, findings and suggestions.

The research resulted in three suggestions regarding the tourism industry in North Karelia. Suggestions were designed according to the analysis of primary data, secondary data and a comparison. The ideas revolve around co-operation between tourism service providers in the area in the form of sales and marketing. Additionally, suggestions include market and product development. The research concludes that inbound tourism in North Karelia is a developing business with the potential to expand.