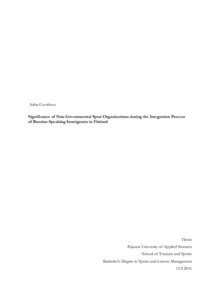 According to the annual report on immigration published by Statistics Finland in 2012, over a quarter of a million foreign-language speakers lived in Finland, and more than 60,000 of them were Russian speakers. By the end of 2012, foreign-language speakers accounted for 4.9% of the population. Those speaking Russian as their native language formed the largest group (62,554 people).

8 persons (two coaches working in SPINNISKOLA, three Russian-speaking children and three parents) were interviewed for this qualitative thesis. The written answers of the interviewees, which was the data of the thesis, were processed using inductive content analysis.

The findings show that a non-governmental sport organization has a positive impact on the integration process of 12-15-year-old Russian-speaking immigrants into the Finnish society. The findings also underline the importance of being involved in physical activity on a daily basis. The results of this thesis can be used by SPINNISKOLA in order to improve work in the organization towards a successful integration process of new immigrants.