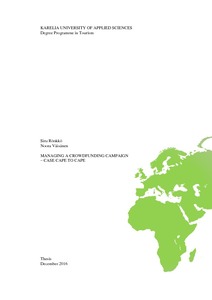 The objective of the thesis was to make plans for a crowdfunding campaign and marketing plan for Joensuu Science Society’s project Cape to Cape. The suggestions made would serve as guidelines when starting to execute the project. Based on the knowledge obtained from researching theory of crowdfunding and marketing suggestions for the operating plan were formed.

Based on the research done for the thesis running a crowdfunding campaign takes a lot of time – the campaigns theirselves are usually rather short, 30 days on average, but the work starts well before the crowdfunding campaign starts. The success of the campaign is believed to be linked to the funders’ perceived preparedness of the project and the extent of the social networks created before launch of the campaign. Gaining a critical mass of early funding seems to be an important factor in the campaign’s success and it is usually gained through family and friends of the project creators.

The instructions for planning the crowdfunding campaign and the marketing in social media were compiled in the thesis to help the commissioner when starting to execute the project. During the thesis process some questions about the project’s nature were arisen and suggestions to clarify them before launching the campaign were recorded.