Acculturation and transition to parenthood in Russian-speaking immigrant families in Finland. 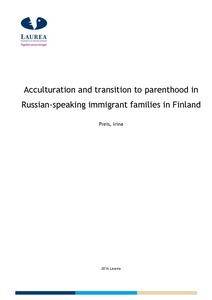 The objective of the research is the development of the knowledge on the processes of acculturation and transition to parenthood in Russian-speaking immigrant families in Finland. The knowledge is required in order to design the education instruments for the families under consideration and the welcoming state social institutions. The objectives of the study included exploration of the perceived psychological adjustment and subjective well-being of the Russian-speaking immigrant families prior to the child birth in the host culture. The disclosure of expectations of the participant family members about parenthood in the new country of residence also comprised an objective. Also, the determination of the social and cultural adaptation processes on the parenting practices and cognitions presented a target.
The study was carried out in cooperation with the School of Social Sciences and Humanities, University of Tampere, which is known for its leading positions in research focused on the relationship between the society and individuals in its changing dynamics.
The theory of the study is based on two main academic trends of acculturation developed by Berry (2005), and the family development theory advanced by Rogers and White (1993).
The research was conducted qualitatively, both in data gathering and their analysis.
The practical methods of research included: semi-structured in-depth interviews with Russian-speaking immigrant families, followed by the projective conceptualization method as a part of the interview. Two focus group discussions with Russian-speaking immigrant mothers were also considered in research. The thematic analysis showed that both processes, migration and parenthood, become involved in the narratives and represent the unity attributed to the effects determined by the personality traits, cultural identity, environmental issues, cultural differences, trust to the system of maternal care, self-empowerment and social support. The subjective well-being during transition to parenthood in immigration is predisposed by the level of acculturation of a parent, and of the overall success of family adaptation. The participants of the study were mostly satisfied with their life at the time of transition to parenthood. However, the study revealed that projective assessments and associations appeared to be rather negative describing the parents experiencing isolation, perplexity, loss of significance, financial difficulties, and conflicts. The respondents’ expectations expressed on the projective part of the interviews were nowhere near their own reality concerning status, respective employment, financial wealth, and social involvement with nationals. Finally, the Russian-speaking immigrant parents have shown an encouraging pattern of attitudes and behavior: despite the anxiety involved in the transition processes, their way of fighting the social isolation and cultural conflict is to create their own community organizations for social activity and change. This way promotes both the cultural adaptation and cultural support within the family and in the society.