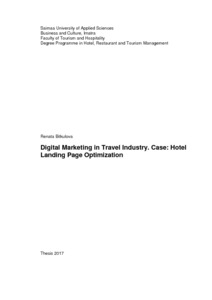 Landing page optimization is implementation of the principles of digital service design to improve the website’s user experience. Well done landing page optimization can have a significant positive effect on the usability and profitability of the website. The objective of the study was to optimize the Russian language version of Vuokatti landing page in order to increase conversion, defined as the number of clicks to accommodation search button.

A literature survey was made to determine the main elements of a successful landing page. Based on the knowledge obtained from the literature, landing pages of three hotel websites were compared and evaluated. Additionally, Vuokatti landing page was evaluated and changes for its optimization were suggested. A part of these changes was implemented and A/B testing was applied to determine the effect of the optimization on website’s conversion rate. The data for the A/B testing was collected through Google analytics service.

The results of the A/B testing indicate an improvement in the landing page conversion after optimization with high statistical confidence. The optimized version of the landing page has replaced the original version. Other suggested changes could be implemented and tested with the same methodology as presented in this thesis.