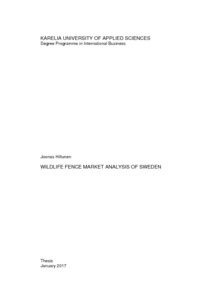 This research introduces a Finnish territory safeguarding company VS Turva-Aidat Oy and their potential situation to expand their business to Sweden. The company is Finland’s best known wildlife fence manufacturer and supplier, among other fence products. The most popular product of VS Turva-Aidat Oy was chosen for exporting: the deer and elk wildlife fence.

The paper contains an analysis about the business environment and market situation of Sweden’s wildlife fence market. The reasons to choose Sweden are the similarities with Finland in business culture and environment, future governmental investments and already established contacts in the country which express interest towards the products of VS Turva-Aidat Oy.

The business environment of Sweden was studied in the form of Pestle analysis. The market was analyzed regarding the target markets and competitive environment. Two target markets were recognized; The Swedish Transport Administration and its supplier companies / main contractors. Competitive environment showed that while there are some domestic competitors to VS Turva-Aidat Oy, the number for direct competitors is low in regards to the wildlife fence, expertise and additional services. Target markets were contacted to recognize their current project involving wildlife fences. In addition, meetings with VS Turva-Aidat Oy were suggested. Additionally, subcontracting was chosen as the market entry method for VS Turva-Aidat Oy.

Conclusions show that even though the business environment and market situation are indeed potential, there are currently no ongoing projects to take part in. However, The Swedish Transport Administration guaranteed to be in contact about their future wildlife fence projects in the country.