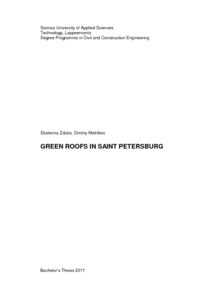 The aim of this work was to investigate Russian and foreign projects of green roofs, evaluate the possibility of building a green roof on the building Gidrokorpus and write recommendations for its installation and maintenance.
Construction of green roofs is becoming now one of the fastest growing areas of landscape architecture and is becoming increasingly popular in St. Petersburg. Considering the insufficient number of domestic works of green roofs in local climatic conditions, a number of environmental advantages of extensive green roofs with different types of vegetation in conditions of St. Petersburg was investigated. Also the possibility of building a green roof on the Gidrokorpus was evaluated and recommendations for its installation were developed.
Ekaterina Zalata was responsible for Chapter 2 (Green roofs now and in the past) and Chapter 4 (Green roof buildings in Saint Petersburg). Dmitriy Melnikov was responsible for Chapter 3 (Green roofs in construction). Chapter 5 (Construction solutions for the roof system of Gidrocorpus) was written by both Ekaterina and Dmitriy.
As the result a construction decision for the roof of Gidrocorpus was provided to the company Delta-t.