The Future of the Finnish Baby Box 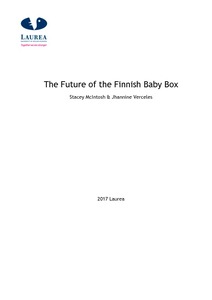 The aim of the study was to describe the views of the baby box in North America. The goals of study were to find out what kind of views the baby box had on child health and wellbeing and family wellbeing. Another goal was to find out if the baby box would be accepted into American society.

The research method used for this study was literature review. Qualitative data was collected through Google and GoogleScholar search engines. Only articles written in English and published from 2007 to 2017 were included in the study. A total of fifteen articles were selected and analyzed. Inductive content analysis was used to analyze these articles.

The results revealed that the baby box would not be sustainable in the United States at its current condition. The baby box works towards giving all children an equal start in life and lowering the infant mortality rate in the country. The box also promotes good parenting by providing all parents with the supplies that they need to care for a new baby no matter what socioeconomic background they belong to. Having all the materials given to care for a child helps in lessening the stress of preparing for a baby and makes having a baby into a reality.

The differences between Finland and the United States are far too great. The differences include size, population, weather, traditions, and society. The success of the maternity package in Finland is contributed to the fact that it is a deep-rooted part of their culture and history. The Finnish maternity package is part of Finland’s identity. On the other hand, Americans have baby showers, which is part of their history and culture that they are able to identify with.