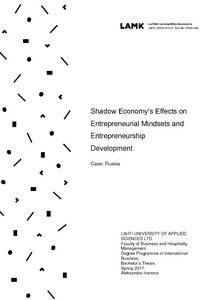 The main research objective was met by utilizing deductive approach and mixed data collection method. Primary data was gathered through semistructured interviews of active entrepreneurs and an electronic survey of the population over the age 18.

The key empirical findings were general distrust of the population towards government, however increasing interest towards entrepreneurial activities. Moreover, large law-abiding attitude was found among survey respondents. At the same time, law-abiding intentions revealed were contradicting with the prevailing tax evasion habit of the majority of the interrogated individuals.

Based on the results of theoretical and empirical investigation, it was concluded that shadow economy mitigates present institutional inefficiencies, thus indirectly promoting the growth of entrepreneurship attractiveness. Thus, slow but stable entrpeneurship development in Russia is expected in next five years.