Effects of cultural components on business in Italy 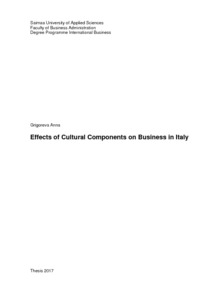 The objective of the study was to examine the impact that specific components of national culture have on Italian business. Therefore, the study aimed first to discover and then to analyse different elements of national culture that have a considerable impact on business in Italy. Firstly, it was determined in the research what culture generally is and major cultural components that constitute culture as a whole were illustrated. Secondly, the importance of cultural elements and their effects on business were explained. Then, the connection of national culture and business of Italy was introduced and described, and the extent to which certain cultural components affect business in Italy was investigated and presented.

The study was based on Geert Hofstede’s six cultural dimensions of national culture. All the secondary data and figures necessary for the work were collected from relevant academic literature, scientific and business articles, including several reliable web pages. The primary data was obtained through the survey. Both qualitative and quantitative methods were used during the research.

The results of the study showed that the main components of Italian national culture affecting business are family, education, and attitudes and values. Theoretical research also highlighted such elements as language and religion, while empirical research – traditions and customs, clothing and food. The study also investigated that the main features of Italian culture influencing business are family orientation, appreciation of academic achievements and education, the use of non-verbal communication, the dependence of image on appearance and visuality, the differences between Southern and Northern Italy, and the aim to build strong long-term relationships on trust. As a result, during the study all research questions were answered and the main objective of the study was met.