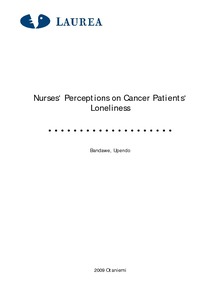 Loneliness is an overwhelming feeling experienced by cancer patients at the end of their journey. Recognising this helps in preparing patient’s peaceful death. The purpose of this study was to describe nurses’ perceptions on cancer patients’ loneliness. A qualitative research method used in the study. The thesis topic originated from the project “Experiences of Loneliness”, which was innovated by Espoo city. The data collected from nursing home for terminally ill patients based in Helsinki from February to March 2009.

A total number of 7 nurses participated in answering open questions in writing, both in Finnish and in English. The Finnish data translated into English before being analysed. A translator and Finnish to English dictionary used to translate Finnish translations into English. The method of data analysis is qualitative content analysis.