Leadership styles in the banking sector in Finland and in France 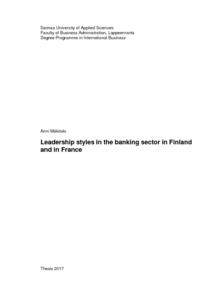 The objective of this study was to examine the possible differences in leadership styles between two countries, Finland and France, from the subordinates’ point of view. The study focused on the banking industry, and the aim was to determine how employees, aged between 25-35, view their leaders.
The data consisted of two parts; previous literature and research, and empirical study. The existing information was collected from journals, online articles and books. The method used for empirical part was qualitative method. This data was collected by questionnaires. Due to different geographical locations, both printed and online questionnaires were used.
The result of the study show that subordinates in both countries viewed their su-pervisor’s leadership behaviour as a mixture of both transformational and trans-actional leadership behaviours. The level of intensity of these leadership behav-iours differed between the two countries; Finnish employees viewed transforma-tional features the most truthful for their situation, and their French counterparts agreed with the transactional features the most. Further study would be required in order to generalize these findings.