Developing a training tool prototype for INACHUS: the Smart Triage system in a game-based approach using the Blender Game Engine 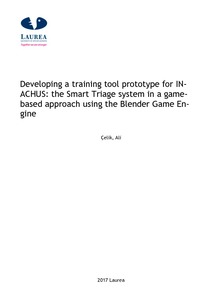 The triage concept is explained and the SALT, START and the Smart Triage systems and their efficiency are discussed in the thesis report. The Smart Triage algorithm is also explained step-by-step. The advantages of the using a game-based approach are also discussed.

The development process that is used for this project for this thesis project was the incremental build model. Meetings with INACHUS representatives were held according to the internal deadlines.

The Blender Game Engine, Python programming language, and the Smart Triage algorithm are used for this thesis project’s implementation.

As an outcome of the project, a training tool prototype was created. The first part of this training tool is a game prototype system which allows the users to interact with patient objects, observe the patient data inside of the game and let the users predict the treatment priority for each patient and tell them if they were right with their predictions. The second part of the project is a software system which extracts the data into a comma separated values file for each patient and then evaluates the patients’ condition based on Smart Triage algorithm and allows the users to observe the patient priority based on the patient data that were created in the game.

The prototype system works successfully and it has passed the software testing session without any sign of error.

The INACHUS representatives were highly satisfied with the out come of the prototype, however, the future development is required for the final training tool. Due to lack of time and resources, this project could not be tested by the urban search and rescue members, thus the effectiveness and the efficiency of this training tool prototype is unknown. , Suggestions for the further development regarding the game content, graphical user interface, patient detection, automation of the patient distribution, automation of the game scene, and the importance and the requirement for the opinions of the urban search and rescue members are described in the thesis report.