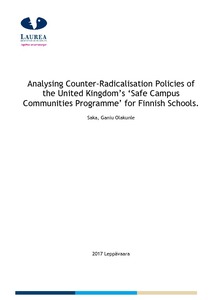 The study of radicalisation and its countermeasures is relatively new, thus, there are issues and controversies surrounding how best to prevent radicalisation, particularly the threat of violent radicalisation that might emerge from Higher Education Institutions’ (HEIs) environments. In preventing such violent radicalisation in UK universities, the Safe Campus Communities Programme (SCCP) was introduced albeit with skepticisms and criticisms from HEI managers and student groups.

The results from the analysis, survey and findings in this thesis write-up show where there are defects in carrying out the UK’s SCCP, the limitations of the Programme’s website and recommendations on how they can be corrected. It also opens the window to further future surveys and debates on the adoption or modification of such a programme for Finland.