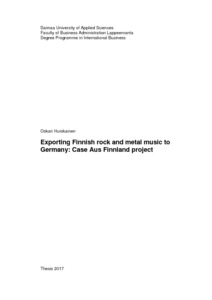 The objective of the research was to find out what kind of assistance companies representing Finnish rock and metal bands could receive for their export activities. The research focused on a project called Aus Finnland which was an export project conducted by Music Finland.

Theoretical framework included internationalization, exporting, export marketing and marketing communication. The information was gathered from multiple sources including books, the internet and different reports. Qualitative research method was used and the data were gathered by conducting an interview with the manager of the Aus Finnland project.

Aus Finnland project provided both financial and non-financial support for Finnish music industry professionals who were exporting to German market during 2015 and 2016. The non-financial support included training and networking possibilities. Creating the contacts is the most crucial issue in the industry. The success is not possible without good networks and contacts. The Aus Finnland project was successful and increased the visibility of Finnish music in Germany.