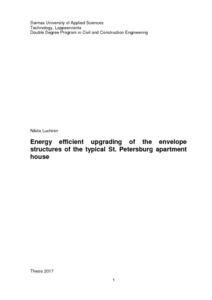 The purpose of the study was to develop the program of a typical Saint Petersburg multi-story house renovation, focused on increasing energy efficiency of the envelope structures. The 5-story slag-concrete residential building was chosen as an object of the study.
The calculations given in the thesis were made according to the Russian set of rules ‘Thermal performance of the building’ and Eurocode norms with consideration of National Building Code of Finland. This study was carried out using Doftherm software in order to simulate thermal properties of enclosing constructions of the object building. All theoretical information was gathered from sets of rules, handbooks, thermal insulation product brochures and the internet.
Three steps of renovation program were developed as the result of the study. Questions of thermal physics of the wall, floor and roof structures have been considered as the central part of the research. Along with this some economical aspects have been described and variants of the improvements implementations have been admitted. Further study is required to identify the possibilities of applying the described methods to other types of houses and to the whole city quarters and districts.