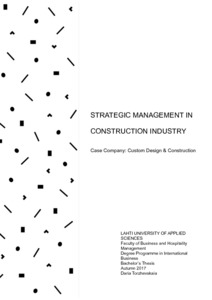 Within construction industry it is largely common for businesses to be more operations oriented rather than strategically led. In particular, small and medium-sized enterprises have been widely myopic in terms of building long-term visions which disrupt their chances for sustainable development. Those, however, that execute strategic planning tend to have higher sales and profit margins, return on assets and employee growth being simultaneously more innovative and nationally recognised.

In this thesis the author reports about the research conducted within a Sydney-based small construction operator with the purpose to identify the case company’s needs for improvement from strategic management perspective considering the industry specific nature. The main objective of the research outcome was to support the case company in focusing efforts and unifying its team in a single direction, along with creating the fundamental values, objectives and standards to guide it through future business decisions. The strategic management models and concepts were adopted to the process of new strategy planning, and the recommendations proposed by the author were shaped by the inferences derived from the empirical research.

The general design of the research applicable for the case study is qualitative in nature. The mono method of single data collection technique has been applied to this research due to resources constraints. Throughout this thesis data have been collected through primary sources - semi-structured in-depth interviews with the case company representatives. It was also underpinned by the secondary sources such as acknowledged academic literature and Internet-based sources. Data analysis was conducted mainly via abductive method which partly includes the elements of deductive and inductive reasoning.

The research has found that the case company was operating well without a consistent and clear business strategy until it has reached a certain maturity point which made it critical for future survival in the market. The company was presented an opportunity to undergo through a new stage of development and thus needs to support its ambitions to eliminate growth restricting factors. The key conclusion is that the company has to focus its efforts on establishing a long-term strategy and reinvent the direction of its development by paying attention to enlarging its resources and capabilities.