The Role of Universities of Applied Sciences in Combating online Radicalisation 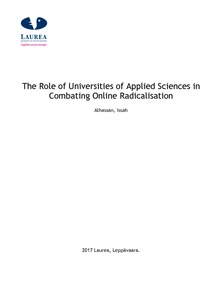 Radicalisation has gained worldwide attention in both academia and the political spectrum. With the advent of ICT, radicalisers have kept abreast with the trend and have resorted to propagating their messages virtually to reach even the remotest part of the world. Social media has now become a major dumping place for hate speeches and radical messages and most students are very active on social media in their quest to gain knowledge accessing their schools’ internet resources thus making them vulnerable. This study therefore seeks to establish what the Universities of Aplied Sciences in Finland are doing to prevent the misuse of the IT infrastructure especially the internet provided to students for learning. The specific objectives are,to find out what kind of IT infrastructure UAS provide for their students, ascertain whether there are restrictions to what kind of contents are allowed for the students using the IT resources of the school, ascertain whether the school monitors the use of the IT infrastructure provided to students, to find out whether there have incidents of violations to those restrictions set by the schools with regards to the display of what content is permitted by the schools, to identify the limitations of the schools towards enforcing the restrictions of the display of contents forbidding by the schools and to find out whether the schools have ever punished any student for flouting those restrictions .

With the analysis done from the field work and information gathered from the review of literature indicate that, the conclusion of the study indicate that the internet plays a significant role in online radicalisation due to the use of the internet especially social media in propagating the messages of radical groups. The study also indicated that, students are exposed to radicalised materials due to the fact that, they make maximum use of the internet in their quest to seek knowledge.

It was recommended from the findings that, the Universities of Applied Sciences must collaborate with social media organisations to train staff of the IT departments to spot and remove all hate speeches and radicalised materials on their internet resources provided to students. Students must constantly be conscientise about the modus operandi of radical groups using the internet.