One town, many cultures 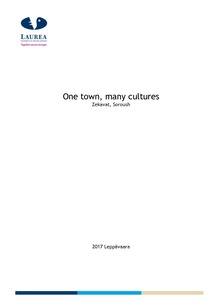 Topic for current research paper is “One town, many cultures” which is regarding the Impact of activities such as language classes and resident forum in Espoo city on foreigners’ integration. The impact could be included of identification of problems or barriers and solutions for coexistence and better communication of locals and foreigners.

This research used different methodology such as Participatory observation and In-depth Interview that implemented via an open-end questionnaire, because observation gives opportunity to observe as participant in the resident forum or language cafe for purpose of having close contact with foreign participants and staff or locals to gain accurate data. However, interview was prepared for asking participants of their challenges as barriers for living in Fin-land. Also benefits they received, for example by discovering positive ideas or activities from their experience with locals, it gives knowledge to find a tool for removing barriers, by development of positive activities and use of existing resources more efficiently.

The interview via use of questionnaires carried out in three different locations and dates. Firstly, interview with refugees in Espoo city secondly, foreign students at Laurea UAS language class, and thirdly, participants at language cafe at Sello library in Espoo city. The Laurea UAS security students were cooperating by Antura project launched in May 2016, the project aims to facilitate coexistence of foreigners and locals by removing barriers, evaluation of discussions from safety point of view in resident forum.

Participants at resident forum were over 60 people and from 11 nationalities at Sello library 27 October 2016 in Leppävaara. They described difficulties in learning Finnish language in terms of classes are not enough, and it is hard to make friends with locals to improve the language. Others complained about hard time in finding job even though they are educated but language efficiency is a barrier. Other barriers are confrontations between locals and foreigners.

The research question was about how to anticipate confrontations and prevent them. To prevent confrontations or crimes such as sex assaults, hate crimes, racism, and anti-migration movements. measurements could be taken consisted of develop resident forums or cultural activities, classes for gender equality and respect for women, language cafe for better communication, church meetings for freedom from loneliness and trauma, positive news about refugee integration on media to give remove negative propaganda, and these are the main findings.