Re-designing Your Future in the Third Age of the Lifespan 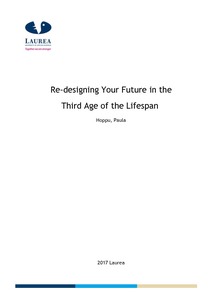 The purpose of this study was to explore the perceptions and experiences of a sample group of people in the third age of the life span. In addition, the study was conducted to enhance the awareness, preparedness and capacity of individuals so that they are empowered to seize the opportunities that await them in retirement. Furthermore, cooperation with a Finnish retirement coaching company was undertaken to investigate if retirement coaching education increases individuals’ opportunities and prospects in the future.

The knowledge base contributing to the empowerment of individuals in achieving a successful and rewarding third age in this study incorporated the conceptualisation of age, social constructions of age, retirement and its effects and retirement coaching education. These aspects in addition to literature review provided the theoretical framework to present a comprehensive approach to the topic.

The research was a qualitative study and was conducted between October 2016 and January 2017. The research method employed was semi-structured interviews implemented with twelve (12) informants, eight (8) British informants and four (4) Finnish informants aged between 49-75 years old. The interviews consisted of a series of background and theme related questions which were addressed to the informants to learn about their perceptions and experiences. The data was analysed by using thematic analysis.

The findings which emerged from the data analysis identified five (5) main attributes an individual needs to be better prepared for the third age in the lifespan. Technology as a tool of empowerment, adaptability to change, intrapersonal skills to develop self and relationships, lifelong learning as part of self-development and commitment to building community spirit were gleaned from the semi-structured interviews conducted with the British informants. In addition, the findings which emerged from the data analysis from the semi- structured interviews with the Finnish informants indicated that the sample group in this study, all exhibited the attributes necessary to achieve a fulfilling third age. This supports the findings obtained from the British informants. The Finnish informants also confirmed that in spite of being well prepared for retirement they had all benefitted from participating in the retirement coaching education.

To promote and develop the concept of third age further measures need to be taken at the societal, community and individual level. Third age coaching education provided by the government and employers could facilitate in empowering and inspiring individuals to redesign their futures in the third age of the life span life to ensure personal fulfilment so that human capital is preserved.