Conversations about creative and inclusive Finland 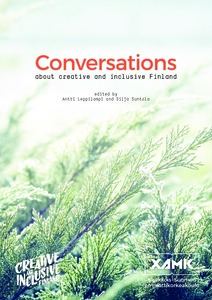 Creativity and inclusiveness, two terms that most governments would hardly oppose using in describing the strengths of their countries. It would be difficult to find a strategy or a related study without a mention of these terms. These terms are perhaps used so much that their meaning has started to lose its relation to the everyday life. Perhaps so much that we are about to forget that they are not a new invention or a boom that someone invented yesterday. Quite the opposite, they have been around for as long as mankind, in one way or the other. Changing forms and shifting shapes, but in the end it comes down to surviving in the midst of constant internal and external turbulences that are bound to manifest themselves in one way or another. Something that is very much true to the realms of arts, culture and sports.

Taking a few steps back, Finland has most certainly had its ups and downs in its history with only 100 years as an independent nation. In the middle of the 19th century Finland was one of the poorest countries in Europe. Between 1860 and 2010 the economy grew 24 fold, and during the independence 15 fold. The growth rate has been the highest in the world after Japan. So the talk about creativity and inclusiveness in this small nation is not anything new.

If I was to say one word that I find deeply hidden behind these words, I would say values. Values are the bases on which individuals act upon, create families, communities and nations. We automatically create systems based on what we perceive right or wrong, good or bad.

Sharing values means something deep. To me it refers to things that are almost impossible to describe without sounding naive or just plain dull. Perhaps they are not really meant to be spoken about but acted upon. They are rather depicted through stories, pictures or sounds that allow room for personal interpretations and different life-stories. I remember former US Ambassador Bruce Oreck stating at a seminar that he admires how Finland is one of the few nations in the world that is based so strongly on the arts. Musicians, painters and poets were inspired by old tales and created new visions and sounds that have strongly built our identity as a nation.

For this publication we gathered some folks around and asked them to share their own thoughts, experiences or inspiring thoughts they had heard. We have included articles that are based on interviews with people who share the strive for something even better. The topics of these three chapters range from grass root level movements and active citizenship to education where learning to learn is the foremost skill and to working life and leadership, which is quickly becoming more shared than anything else. All the three chapters bear some elements to what we think are the basics of the creative and inclusive Finland today. Throughout the story you will pick up on some basic values that we think make up the basis for an inclusive and creative society tomorrow or a hundred years more to come.