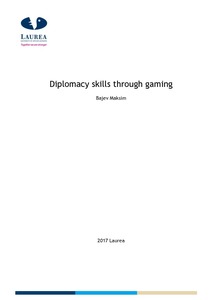 The purpose of this thesis is to suggest improvements and bring different diversity to the companies that concentrates mostly on soft skills. Out of the diversity of the soft skills, one of them has been taken into consideration at its most. Negotiations is playing a significant role in conflict prevention and peace building mission. It’s have always been as a part of diplomacy and therefore they are interconnected.

The main point is to try to implement diplomacy into the GAP project, because they are offering a solution to the 21st century in conflict prevention and peace building. We are living in the modern society and the usage of the constantly developing systems almost is a must. The key issue for success is communication as it always has been, is and will be. Modern technology has to be included in order to achieve the goal of the game creation, that will provide to peacekeepers additional trainings

Based on the thesis, recommendation of the guidelines has been made. It takes into account the special nature of the GAP project and its idea to create Serious game of the 21st century. Guidelines can also be used in other community and govern organizations. Since the idea of the thesis requires support from different instances, cooperation is unavoidable, yet the privacy has to be included until the end result.